THE PORT of MILNTHORPE

This beautiful map was designed for the archive  by local resident Gordon Biddle and drawn by his daughter, Alison Aitken.

Click on the image below to open full version 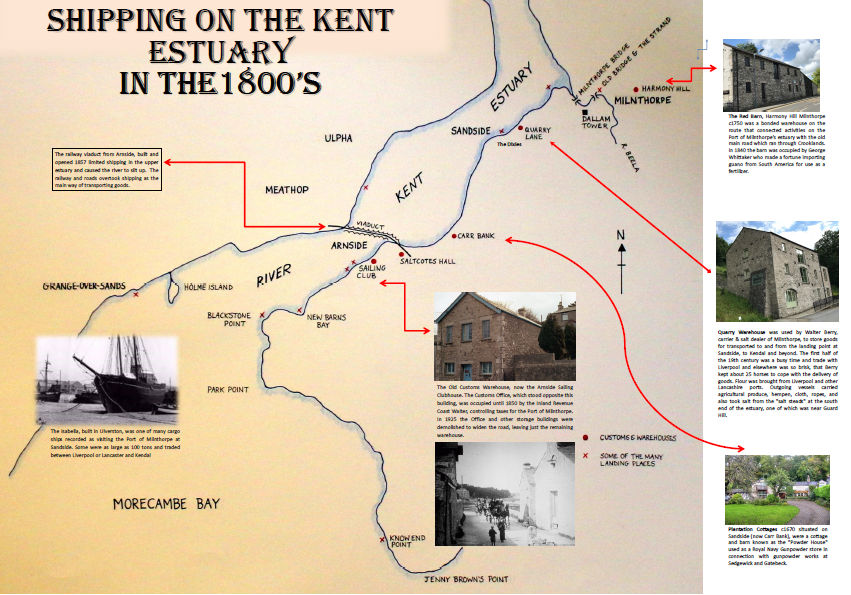 As local peat supplies were becoming exhausted in the 1720s, Kendal increasingly relied on coal as a fuel, either from West Cumberland or, principally, from the Wigan coalfield, brought down the River Douglas Navigation to the Ribble and thence coastwise to the Kent estuary.

In the opposite direction Kendal woollen goods were exported to the West of Scotland, North Wales, Ireland and, occasionally, across the Atlantic. At the landing and loading points shown on the map, ships were beached on the incoming tide and loaded and unloaded either into carts or into small lighters capable of navigating the River Beela up to the old bridge in Park Road at Milnthorpe. Four custom houses were built also shown on the map.

This trading was largely superseded by the opening of the Lancaster Canal to Kendal to 1819, especially the branch canal to Glasson Dock (opened in 1787) which enabled small sea-going craft to navigate the canal to Kendal. There was also considerable trade via a wharf Banh at Hest Bank where the canal is within l/4mile of the coast.

Everything changed again in 1857 when the Ulverston &Lancaster Railway completed the Kent viaduct at Arnside, where a station was opened. Although originally to have an opening span to allow vessels to continue up the estuary, it was made a fixed span following an agreement with Kendal interests that, in return for blocking shipping upstream, the railway company would build a pier at Arnside and a new road to Milnthorpe. The original wooden pier was replaced by the present stone jetty.

Boat-building had long been established Lancaster, but around 1838 Francis Crossfield started building boats at Arnside. Among other activities, family members of the extensive Crossfield family were also builders and contractors, responsible for many of Victorian buildings in the village and ran a bakery and grocery business.