AND HIS CONNECTIONS WITH ARNSIDE

Arthur Ransome (1884 – 1967) was an English author and journalist. He is best known for writing the Swallows and Amazons series of children’s books about the sailing adventures of children in the Lake District.

His love of sailing dates back to his childhood when the Ransome family would holiday in the Lake District and Arthur began his fascination for the area. He grew up to love Coniston Water and it became a private rite for him to run and dip his hands in the Lake as soon as the family arrived for their holidays. He knew Arnside from childhood and no doubt came with his parents to visit the village on several occasions, hence his familiarity with the Crossfield boatyards. 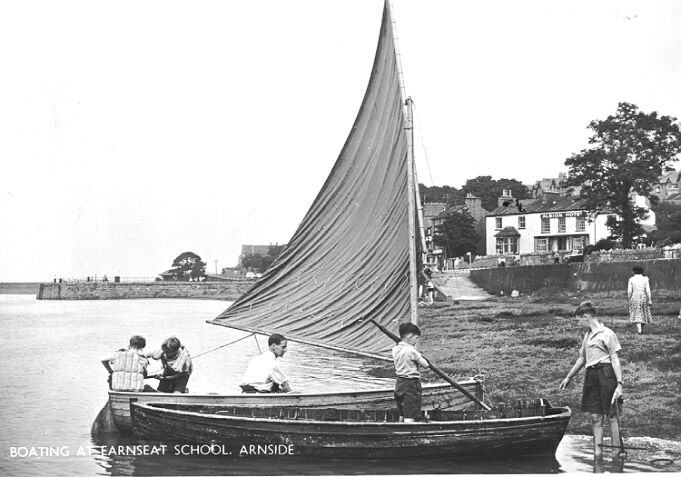 We can document Ransom’s connections with Arnside from his diary entries and his letters.

A diary entry, from 26th January 1933 – records that he visited Arnside to see Francis Crossfield – who was now over 80 - (who built ‘Swallow’ in the years before the War).

The second diary entry, likely attributed to his wife Evgenia dated 7th June 1933 – records that their friends Charles and Margaret called for them to go to Arnside to find if Swallow’s twin is for sale. The entry states that it was “a very pleasant expedition” – although Swallow’s twin was found not to be for sale. The visit resulted in Charles and Margaret ordering a boat to be built for their use instead. The entry recalls that it was “frightfully hot” but a “most successful day in spite of the heat and crowds of small boys ….” (No doubt pupils of Earnseat).

10th December 1945 – In a letter to Reginald Kaye of Silverdale (the nursery owner) Ransome mentions his old friends, the Crossfields in Arnside: “….. the shed at Arnside where they (one of them I fear is now gone) have built so many good little vessels. I was sailing yesterday on the Thames in a first rate little 13 footer that they built at Arnside in, I think 1934, the kindliest little boat of that size ever known.”

Built in Arnside around 1912 and designed for use in shallow estuaries such as the River Kent, Swallow had a full length six-inch wooden keel and carried ballast to provide stability. She was designed as a working boat - it is not known who she was built for.

In 1928 Swallow is purchased by a friend of Arthur Ransome, Ernest Altounyan who buys two dinghies for £15 each – the cost being shared with Ransome. One is Swallow the other Mavis – later to be immortalised in Ransome’s books as Swallow and Amazon. The understanding between the two men is that when Altounyan returned to Syria, Arthur would retain one of the boats, which is what happened.

In 1933 Ransome visits Crossfields to arrange for Coch-y-bonddhu to be built for his friend Charles Renold. However, in 1934, Charles hands ‘Cocky’ back to Ransome as he prefers fishing to sailing! So in 1935 we find Ransome selling Swallow – coincidentally to be bought by an Arnside lad, 15 year old Roger Fothergill. At the outbreak of war in 1939, Fothergill arranges with Crossfields to sell her and no further records exist after that date. There are, however, a number of replicas of Swallow, including the one made for the 1974 film.

Ordered in 1933 and built by Crossfields in Arnside for Ransome’s friend Charles Renold at a cost of £21.00. Given back to Ransome in 1934 who takes the boat with him when he moves to Suffolk in 1935. On returning to the Lake District in 1940 Ransome  brings the boat back, sailing it regularly on Coniston.

In 1950 Ransome moves back to London and sells Cocky. Through a boatyard at Bowness, Cocky is bought by John Barnes, Headmaster at Earnseat Prep School and returned to Arnside apparently on a coal lorry! The boat remains with the school until the 1960s when it is bought by Jeff Parker-Eaton, an ex-racing driver and member of Arnside Sailing Club. Eventually, it is taken to a Dr Barnado’s Adventure Centre in a remote location at the head of Loch Nevis.

In 1968 it is bought by fiddler Charlie McFarland for use as a fishing boat in Scotland. Discovered in 1992 in a poor condition, laying in the garden at the Kilcamb Lodge Hotel at Strontian, Cocky is bought by the Arthur Ransome Society and restored by John Hodgson at Flunary (Sound of Mull). Hodgson had previously worked for the boatyard in Arnside so Cocky was in good hands.

By 1995 the boat is on display at Windermere Steam Boat Museum until its closure in 2006. The boat is regularly raced over the next several years and was used by Griff Rhys Jones in a BBC documentary about Arthur Ransome in 2005. In 2008 she was moved to Windermere School and is now in storage with Lakeland Arts Trust prior to going on display at the new Windermere Jetties Museum."